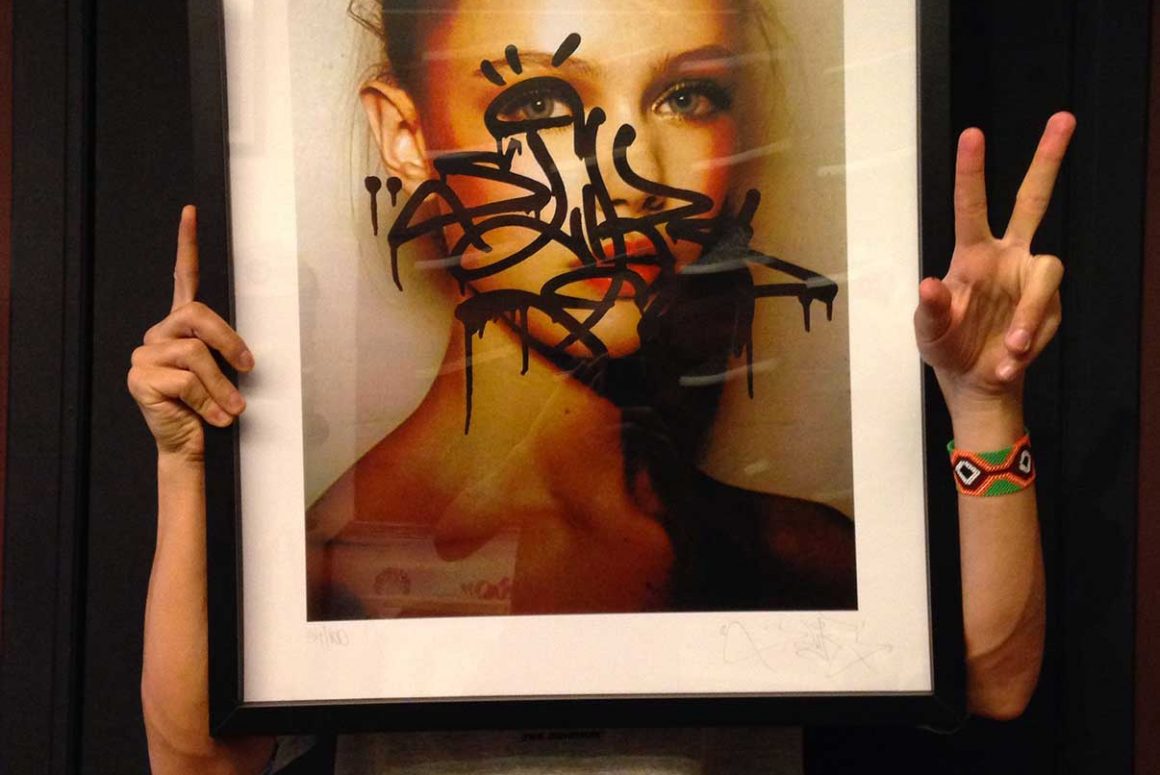 “There is a lot of talk about the relationship between cave art and graffiti. Yes, both forms use a wall as a medium to express. Yes, humans today still seem very primitive. But that’s it. Then, there was a need to represent and understand the outside world; and now there is a need to affirm and understand our inner world.

Then, rules were being created. Now, there is transgression. Then, words were not being written and perhaps drawing was the only visual form of communication. Now, the written form is the origin of everything.

Rafael “SLIKS”, is a native Brazilian, born in the neighborhood of Bela Vista, in the center of São Paulo. Throughout his childhood he would draw comics, but throughout youth he would skip class to get to know his city.

Always aware of his surrounding, he remembers crusing around Roosevelt Square with his friends from the skate scene. His first contact with the urban scene was in his school classroom and then the streets of downtown São Paulo. At the end of 1996, he moved to the South zone of Sao Paulo where he immersed himself in the world of graffiti.

Since the beginning of 1997, Rafael’s style has evolved extensively.

He chose not to remake the same image again and again and continues to challenge himself by testing new techniques and experimenting the unlimited possibilities of his expression with art.

Sliks’s work is known for his unique approach, in which he developed his technique for canvas and adapted it for use on the walls. Quite logical when you think about it, the experience of an artist on canvas ensures his portfolio is full of paintings. If he is painting on paper or a wall, the artist has a consistent technique involving layers.
Rafael always was impressed and inspired by the movements of Abstract, Calligraphy of Oriental films, Art noveau, Surrealism and Abstract Expressionism, mainly Graffiti. All of which play key roles in defining Sliks’s style.

Technically, his art is a synthesis of color experiments with a remarkable diversity of thickness of strokes and sprays. He uses many different types of lines to evoke surrealistic feelings and his overall appearance can be described as totally abstract or at times the figurative abstract. Raphael’s graffiti changes randomly between traces of simple colors that dominate most of his works. Sliks’s artistic universe reflects the tension between the physical chaos in urban areas and the spiritual introspection he experiences in nature. As his main sources of inspiration, Rafael Sliks’ art seeks to harmonize and reconcile cities and nature in a single movement, mixing the colors and visions of nature with his ultra-fast movements of and vice versa.

His art originates with graffiti for which he developed a stroke style with the spray can, heavily influenced by the TAGS style signatures of street writers. He creates and experiments his calligraphy and typographies. Colors, repetitions, overlaps, movements, nature and musical beats help nourish his inner world to create visual enigmas and infinite extensions of his universe.

It is frequent to come across his tags on the streets of São Paulo. It is a daring, single color, not a sketch. The rapid movements of his hand, the arm, the correct finger pressure against the spray nozzle, the angle and distance between the can and the wall. Everything determines the result. As synthetic as complex, the tag carries a tradition as respectable as the traditional great art, unifying the technical domain with the aesthetic.

Sliks creates independent worlds of color and form in which there are no more autonomous segments, but only a unified body of art and individual. Rafael portrays different perspectives, blends reality with fantasy, and literally opens windows through which new and unexplored worlds and dimensions can be sighted.

His works can be found on streets around the globe. Nowadays the urban artist takes his art to major exhibitions in galleries and museums in Brazil and around the world.